The Village of Weybourne.

The name is thought to have been derived from the 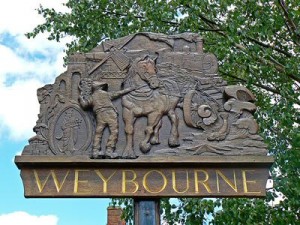 Old English name ‘Wearg-Burna’  the ‘Felon Stream’ and may have been a place where criminals were drowned. 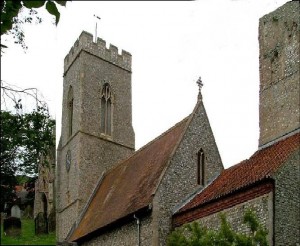 The main tower is that of the parish church. On the right there is a smaller tower which is older and belonged to the original 11th century church. There are the remains of a priory in the grounds of the church. It was founded in the early 13th century as a place for Augustinian monks to live and worship. By the 16th century the priory had become impoverished and it was dissolved by Henry VIII. The church remained poor until major refurbishment took place in the Victorian era. 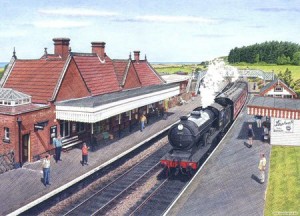 The train line, which passes to the south of Weybourne, opened in 1887. It was once part of a much larger network called the ‘Midland and Great Northern’ popularly known as the ‘Muddle and go Nowhere’. Weybourne station is a mile out of the village because local landowners, at the time, were unwilling to sell their land to the rail company. The station was important during both World Wars as it was used to move troops to the army camps at Muckleburgh and Kelling Heath. It closed in 1964 and is now part of the North Norfolk Steam Railway. 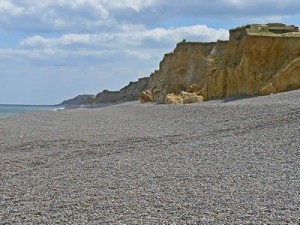 The beach at Weybourne, also known as Weybourne Hope, shelves very steeply providing a good landing place for large ships throughout history. As far back as the 16th century, the time of the Spanish Armada, there were fortifications I the area because of the fear of a possible Spanish invasion. It was also seen as a threat in the Napoleonic era and during both world wars when there was military activity in the area. An old poem says ‘He who would Old England win, must at Weybourne Hope begin.’ 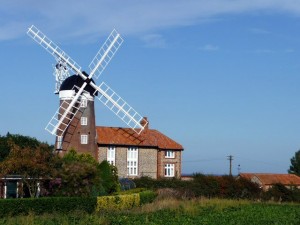 Weybourne Mill was built in the 19th century for grinding corn. The strong winds, influenced by the North Sea, made this an ideal location. The mechanisms were made from hornbeam, a tree that can be found at Kelling.

This website uses cookies to improve your experience while you navigate through the website. Out of these, the cookies that are categorized as necessary are stored on your browser as they are essential for the working of basic functionalities of the website. We also use third-party cookies that help us analyze and understand how you use this website. These cookies will be stored in your browser only with your consent. You also have the option to opt-out of these cookies. But opting out of some of these cookies may affect your browsing experience.
Necessary Always Enabled

Any cookies that may not be particularly necessary for the website to function and is used specifically to collect user personal data via analytics, ads, other embedded contents are termed as non-necessary cookies. It is mandatory to procure user consent prior to running these cookies on your website.